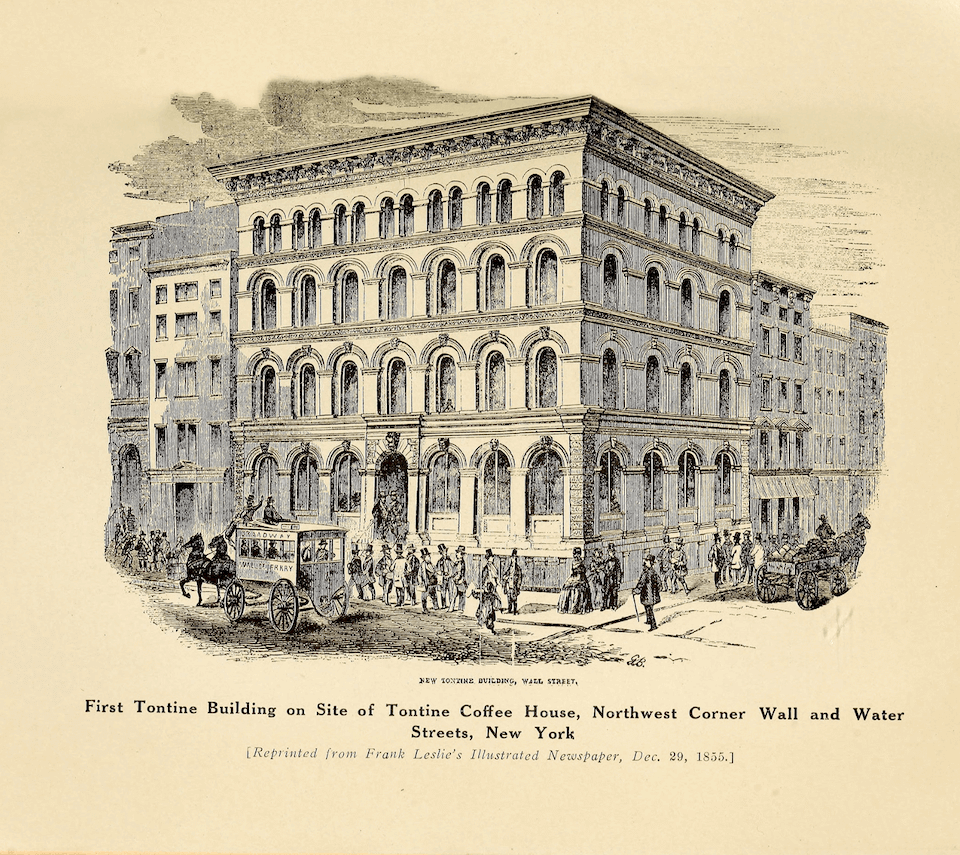 A brief retelling of our building’s rich history

Along with Plymouth Rock and the Fountain of Youth, few places inspire as much imaginative reverie as the stately columns and shaded side streets of Wall Street. From its earliest beginnings in the early 1600s by Dutch settlers, when the southernmost tip of Manna-Hata Island was newly christened New Amsterdam, the trading post became an instant international magnet for commerce. 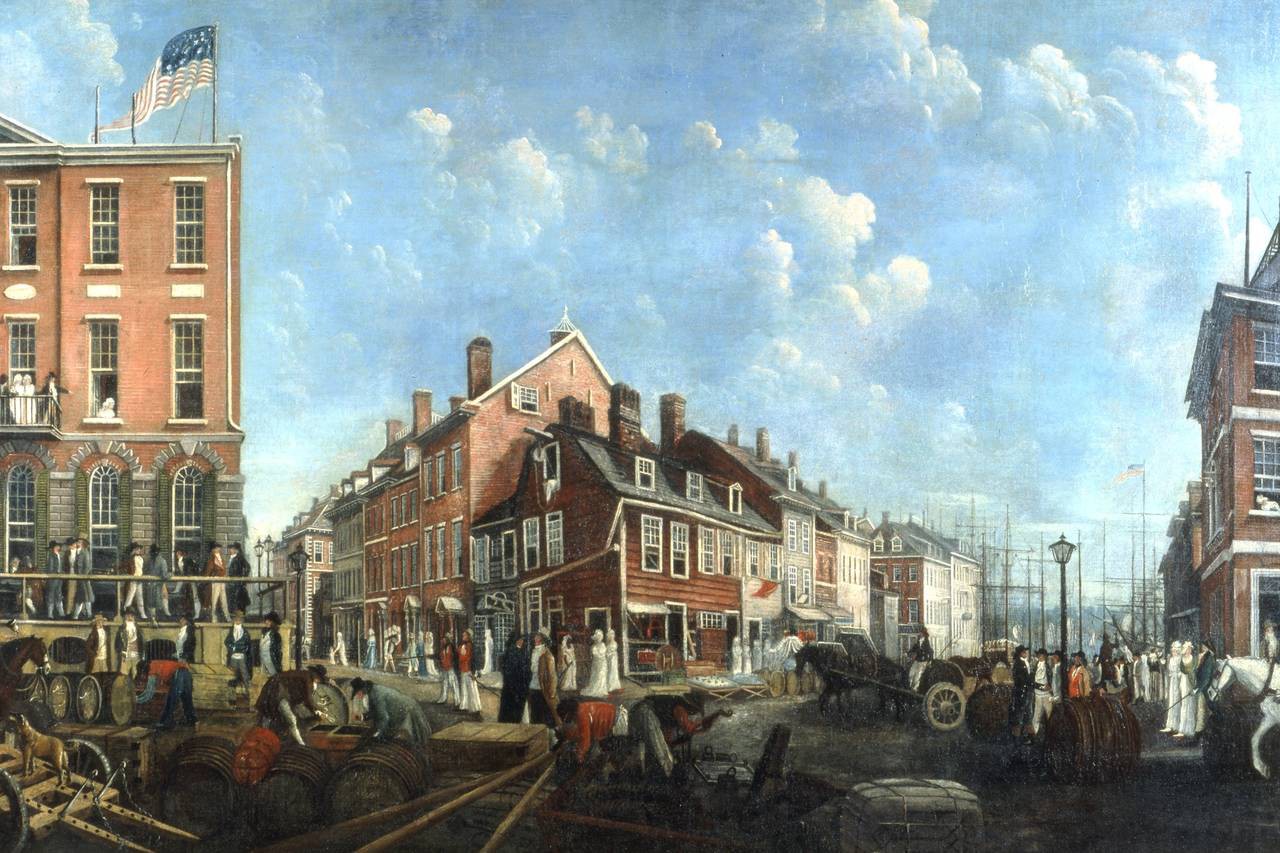 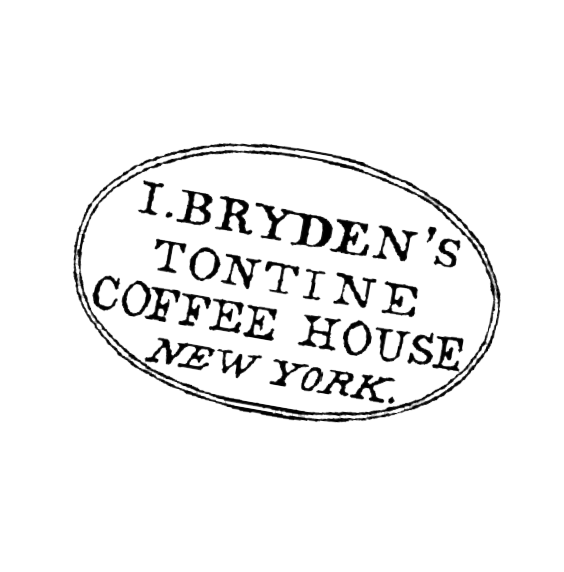 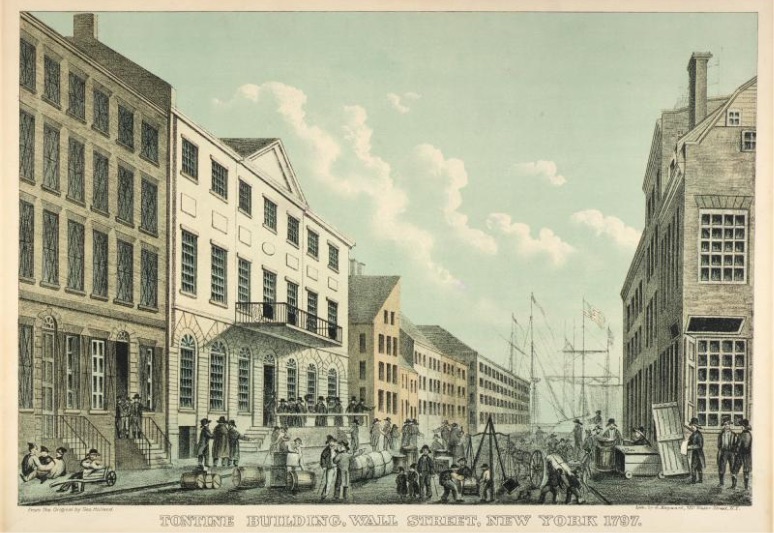 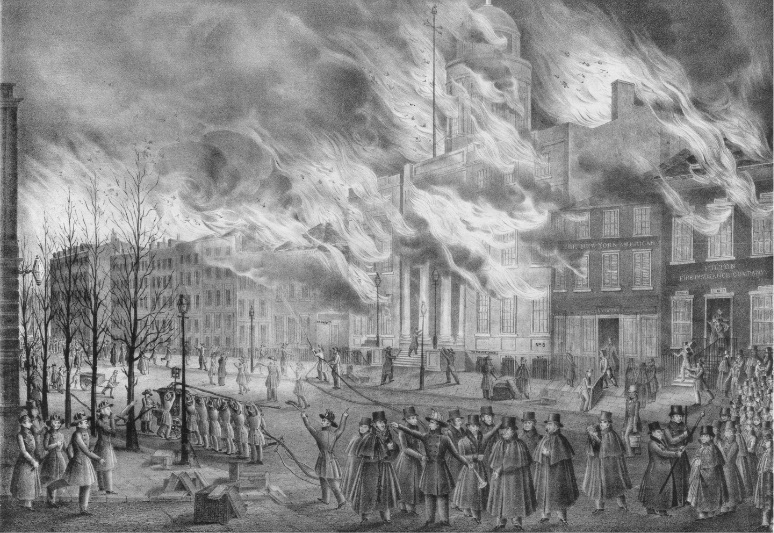 Even after the British acquired the land from the Dutch and renamed it New York, the little colony south of a certain wall and a certain street only grew as a place for trade, where merchants of all nationalities and stripes were welcome to buy and sell. Herman Melville, who lived and worked in the area, said it best: “There now is your insular city of the Manhattoes, belted round by wharves as Indian isles by coral reefs—commerce surrounds it with her surf.”

The New York Stock Exchange began in theory under the name the Merchants Exchange in 1792, when a group of merchants and auctioneers signed the famous Buttonwood Agreement under a buttonwood tree at 68 Wall Street. Or at least that is the legend. But it began in earnest a few months later at 82 Wall Street — at the Tontine Coffee House, a handsome brick tavern & coffeehouse founded by those same Buttonwooders as a place to trade. They chose a clever name for their combination of a coffee house and stock exchange: a tontine. A tontine is a cooperative investment pool that functions like a trust, but one that only pays off to its last surviving member, making it both an investment in, and a gamble on, the future.

For decades, the Tontine was the center of New York’s commercial life. Deals were done on the vast trading floor upstairs, over coffee or ale or food downstairs; or auctions were sometimes conducted from the terrace outside. It was a club—a place to receive and send mail and messages. It even survived a double whammy: in 1835, when it was miraculously spared from the Great Fire that completely destroyed the whole area; and in 1836, when Merchants Exchange moved to much grander new quarters at 55 Wall Street (with a giant central trading hall that was then the largest in the world). The Tontine remained popular, not just living on as a tavern, hotel and watering hole, but as the literal first place for news. Positioned right in the midst of what had become New York’s first news and printing district, the Tontine was the place people came to get (and spread) the news first—an asset that lasted for decades more. Even when the original building was demolished in 1855 and a six-story one erected in its place (and now called simply the Tontine Building), news and coffee remained the plat du jour.

By 1900, the region’s peaked-roof colonials were giving way to a new kind of building called “skyscrapers.” One of the new architecture’s most respected firms, Clinton & Russell, Holton & George, had just completed a handsome 18-story building up Wall Street. (And they would later be chosen to design the Cities Service Building around the corner at 70 Pine Street, a New York Art Deco masterpiece rivalled in perfection only by the Chrysler Building.) A sharp-eyed real-estate tycoon saw a chance with the Tontine Building, so he bought it and built a restrained, 14-story rusticated Beaux-Arts building that would bring the ornament and tradition of the 19th century to meet the clean modern ambition of the 20th. A couple years later when the building next door came up for sale, he bought it and built an addition to the first that seamlessly melded them together. An amateur eye would never spot the difference.

For the first decades of the new Tontine Building's life, its stories were filled with the Wall Street finance and insurance firms that gave the quarter its name. But as the city grew north, so did business: midtown became the center. So when Allan Gerdau, president of the highly successful Otto Gerdau & Co. import & export business, saw a chance to house his growing empire in an entire building right on Wall Street, he leapt at the chance.

Gerdau’s father Otto had founded the company in 1872, not long after immigrating from Germany. Among the first things he imported was ivory, but soon diversified into synthetic substitutes and other products and artifacts from around the globe. He had two sons: Allan and Carl. Allan was only 19 when Otto died in 1920, leaving Allan to take care of the company himself. And for the next seven decades, he did, expanding into furniture design, real estate and more. By the 1930s, he had become the biggest importer of mother-of-pearl in the world. He controlled the entire company from his New York office. A desirable commodity made from Australian oysters the size of dinner plates, mother-of-pearl was fashioned into everything from shirt and coat buttons to ornamental details on furniture, housewares, fashion accessories and more. 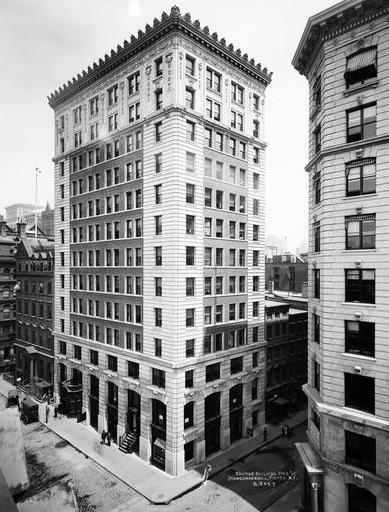 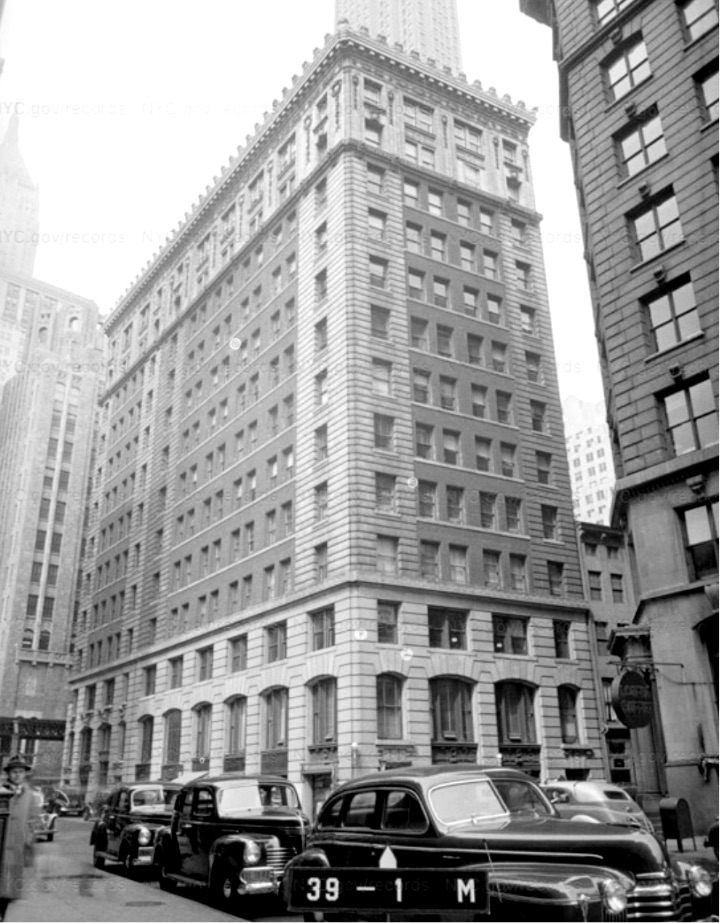 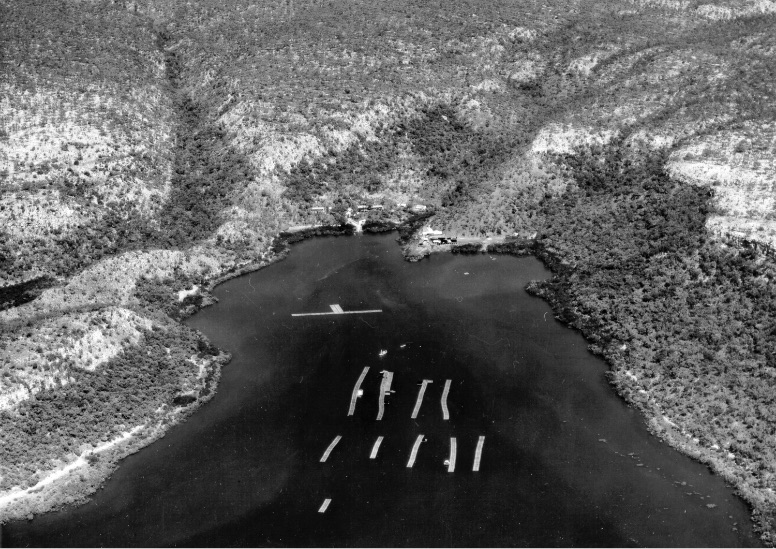 “I subscribe to the theory expressed by Confucius: behave toward everyone as if receiving a great guest.” 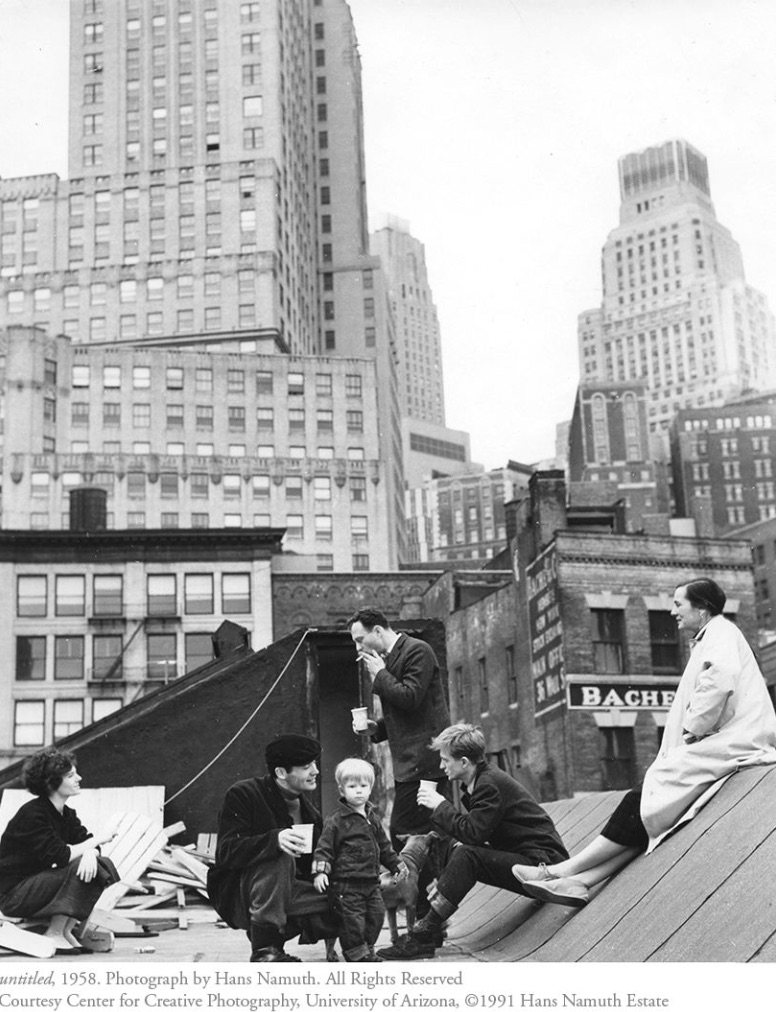 After World War II ended and shirt makers had discovered the magic and low price of new buttons made of plastic, the bottom fell out of the mother-of-pearl market. But in a sterling example of making lemons out of lemonade, Gerdau teamed up with two partners, one Australian and one Japanese, to put those huge Australian oysters to even better use: he started the world’s first cultivated pearl farm to create natural, large and luminescent South Sea pearls from Pinctada Maxima. The result was something new: the largest and most expensive pearls in the world, which they could produce at nearly three times the volume—and at nearly double the value—of their competitors.

But while Gerdau’s fortunes continued rising through the 1950s, this was not the case for the Financial District. With a major percentage of firms having decamped for midtown, Wall Street and indeed much of Lower Manhattan began to feel abandoned in places. Right around the corner from the Tontine Building, artists like Ellsworth Kelly, Agnes Martin, Robert Indiana and Jasper Johns could rent huge, cheap painting studios.

Gerdau tried breathing some new life into the area. In 1965, he opened the Tontine Emporium in the building, packed to the rafters with chic European furniture and exotic furnishings he imported. “I subscribe to the theory expressed by Confucius: behave toward everyone as if receiving a great guest,” Gerdau told the New York Times.

Wall Street continued to change; the Tontine Emporium did not survive Gerdau’s death in 1986. By the 21st century, the stock exchange existed more on the internet than on Wall Street, where the stock exchange interested tourists more than brokers. But the spark of new interest in the area following the September 11th attacks slowly caught on, and a wide variety of creative businesses started moving into the neighborhood. Famous business skyscrapers like the Woolworth Building, One Wall Street and 70 Pine turned residential. It became common to see stylish city people dashing for the subway or the new ferries. Although the once-sleepy financial district was changing, it was still missing something. But what?

Back in the late 1980s, Allan Gerdau’s death caught the interest of the legendary Paspaley family, who had been one of the world’s foremost companies of pearl collecting and trading for almost a century. Run by a family dynasty in Australia since 1919, the Paspaley Pearling Company is today a staggeringly high-tech operation seeding and extracting thousands of pearls a day from the waters off Australia’s northwestern coast.

The estate Allan Gerdau left behind was maddeningly complicated to unravel, so the Paspaleys came in and bought all of it—lock, stock and barrel—expanding its pearling territory both under the sea and across it. This transaction also delivered the Tontine Building to the Paspaley family, whose members weighed, imagined and deliberated for years what if anything to do with it. But seeing the dawning of a stylish new age for the Financial District finally gave them the idea that they should give the neighborhood something it very badly needed.

In a dinner-plate oyster shell, this was the lustrous vision behind The Wall Street Hotel: to create a place that embodies Allan Gerdau’s dream of “an oasis of charm and culture,” and to meet the flawless standards of luxury that the Paspaley family holds all its ventures to. The Wall Street Hotel was conceived from the start to provide the neighborhood with a welcoming and colorful central location right at the neighborhood’s crucial intersection. A place where professional people and global travelers could find relief, comfort and life. Where friends and colleagues could meet for a meal, a caffe latte, or a drink at any time. A place to be happily together or blissfully alone. All the style, smarts and sociability of a hotel on the Upper East Side, all the discreet chic of an elegant SoHo gem — this is the pearl that is The Wall Street Hotel.

A far cry from the selfish arrogance of Oliver Stone’s “Wall Street,” The Wall Street Hotel is now a heartily vibrant place that is just steps from the newly popular and redesigned Seaport as well as the most historic and fascinating buildings and legends that New York has to offer. It welcomes artists and architects as well as stockbrokers and hedge-funders. It is a place that subscribes to Confucius’s saying: “Behave toward everyone as if receiving a great guest.” 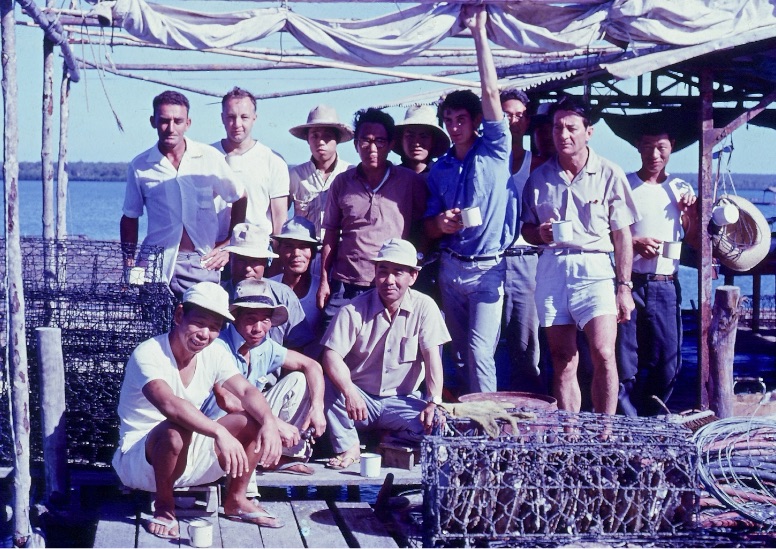 “An oasis of charm and culture.” 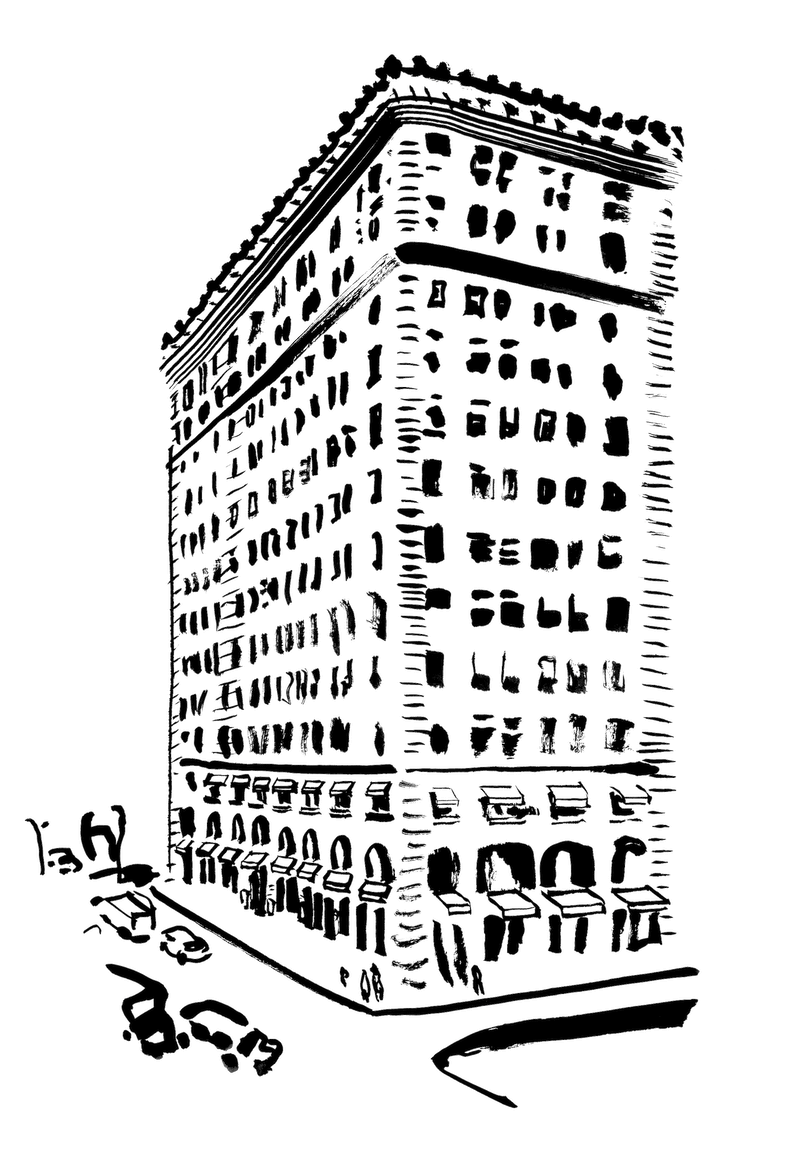